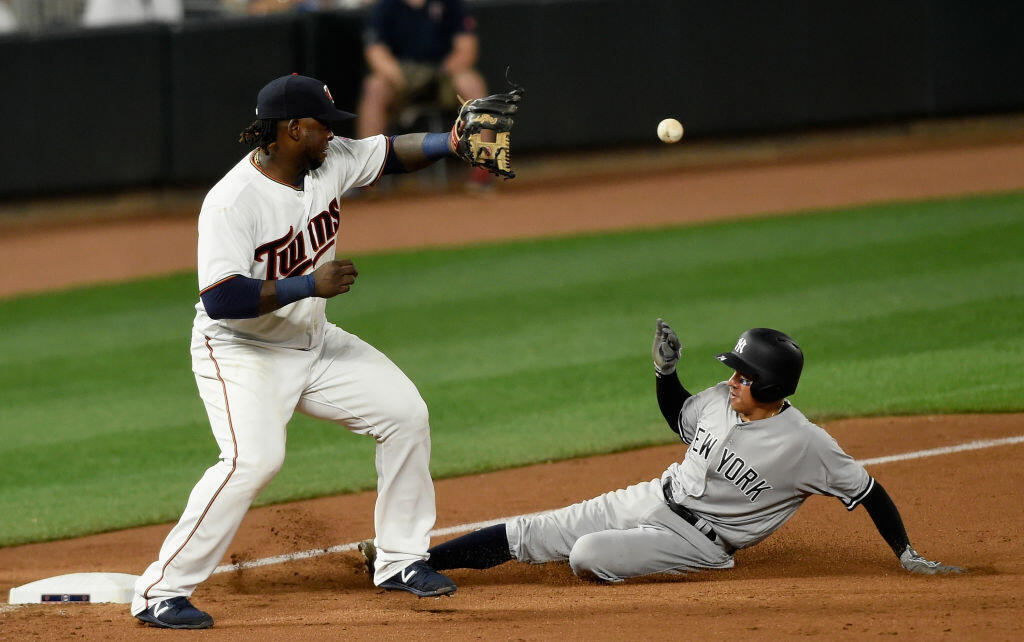 NEW YORK -- In two weeks, the New York Yankees and Minnesota Twins could be getting together at Yankee Stadium for a game in which one team goes home for the offseason.

The Yankees and Twins enter the opener of a three-game series Monday night at Yankee Stadium as the wild-card leaders.

The wild-card game is slated for Oct. 3, and if the standings hold, the Yankees would host it. It is also possible it might not be the Twins who are the visiting team in the elimination game.

New York (82-67) is four games ahead of the Twins for the first wild card. The Twins hold a two-game lead on the Los Angeles Angels for the second spot.

The division also remains an option for the Yankees, who are three games behind the Boston Red Sox in the AL East. The division title is no longer available for the Twins after the Cleveland Indians clinched the AL Central on Saturday.

"We're facing a tough trip," Minnesota manager Paul Molitor said. "You go on the road in mid- to late September and have to play 10 games, it's going to present its challenges. You combine where we are at with that."

New York hit 12 homers and scored 34 runs while taking three of four from the Baltimore Orioles. The Yankees nearly completed the four-game sweep, but Gary Sanchez struck out in the ninth representing the go-ahead run in a 6-4 loss Sunday.

"You lose today, on the day that the Red Sox lose, but I mean we're continuing to play well, even on a day that we lose," Yankees manager Joe Girardi said. "We have an opportunity in the ninth inning, and that's what you want. We just need to continue to play well."

The Twins head into their trip after rallying from a five-run deficit in a 12-7 win over the Toronto Blue Jays on Sunday. Minnesota scored seven times in the second inning and hit four homers overall.

Minnesota has homered in 16 straight games for the second this season to tie a club record. The streak is occurring while second-leading home run hitter Miguel Sano (28 homers) is recovering from a left leg injury.

Eddie Rosario hit two homers Sunday, raising his total to 26. He has 15 homers and 36 RBIs in his past 39 games.

Jaime Garcia, who made one start for the Twins before being acquired by the Yankees, will attempt to get his first win for New York on Monday. Garcia is 0-2 with a 4.60 ERA in six starts for New York.

The left-hander came close to getting a victory Wednesday when he allowed one run on five hits in 4 2/3 innings in New York's 3-2 win over the Tampa Bay Rays at Citi Field. Garcia was replaced when he needed one out to qualify for a win, as Girardi wanted to have him avoid facing Evan Longoria for the third time.

He is making his second career start against the Twins. Garcia faced them June 18, 2015, in Minnesota for the St. Louis Cardinals. He tossed six scoreless innings in a no-decision during a game decided by Kennys Vargas hitting a ninth-inning, game-winning home for the Twins.

Ervin Santana, who might start a wild-card game for Minnesota, will oppose Garcia, trying to become the eighth 16-game winner in the majors. He also is two away from his career best for wins set in 2010 for the Los Angeles Angels.

The right-hander is 4-0 with a 3.53 ERA in his last 10 starts since July 21. He took a no-decision Wednesday after allowing three hits in six innings during Minnesota's 3-1 win over the San Diego Padres.

Conversely, Todd Frazier is 1-for-19 and Didi Gregorius is 2-for-14 off Santana.