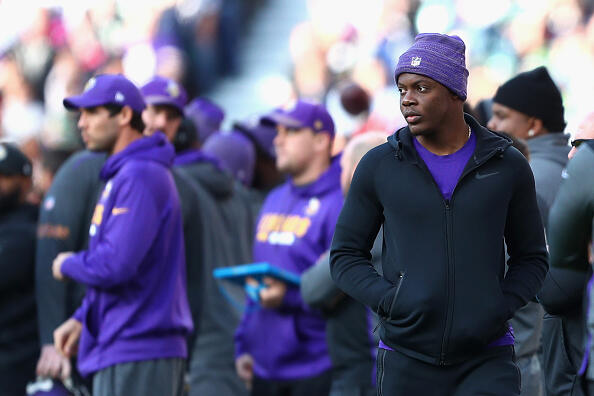 What is "tolling" in the NFL and what does it mean when it comes to Teddy Bridgewater?

It was a blip on the radar point of contention back in April/May when the Vikings announced they would be declining the fifth year option in the contract of their injured quarterback. The topic came and went and was quickly forgotten. Now Teddy has been activated, the small inclusion in the NFL Collective Bargaining Agreement is still being mostly overlooked and we can't seem to get any clarification...

Let's start with a little explanation of the situation here and then move into why it matters for the Minnesota Vikings moving forward.

I don't encourage you to do so because it's dry and dull, but if you don't believe me go ahead and dive into the current NFL Collective Bargaining Agreement (CBA). It's posted online HERE and the point of contention pops up on page 128.

Article 20, Section 2 on that page covers some rules surrounding the Physically Unable to Perform list, specifically the "tolling" of a contract. You've probably never heard about tolling because the circumstances surrounding it are unique and rare, but Teddy's situation hits.

Here's what the rule reads...

Any player placed on a Physically Unable to Perform list (“PUP”) will be paid his full Paragraph 5 Salary while on such list. His contract will not be tolled for the period he is on PUP, except in the last year of his contract, when the player’s contract will be tolled if he is still physically unable to perform his football services as of the sixth regular season game.

Okay, in Layman's terms, since Teddy was placed on the PUP list in the final year of his contract, it is possible that the Vikings can "toll" or delay the final year of his contract to 2018. Think of it similarly to a medical redshirt for a player in college. The contract in this scenario remains very favorable for the Vikings as the rate would be the same as his 2017 rate would be ($1.345 million). Under the premise of the rule as it is written above, Teddy would be under contract for the 2018 season.

That's where the point of contention pops up.

The letter of the law would tell us that Teddy's contract can be tolled to 2018 since as the rule states he was "still physically unable to perform his football services as of the sixth regular season game." But some are interpreting the rule to only allow tolling if the Vikings were to NOT have activated Teddy after the 21-day period that ended this afternoon.

There is no clarification in the CBA document, still after reviewing the possibilities with the league the Vikings know exactly what their options are.

General Manager Rick Spielman joined PFT Live earlier this spring to discuss this ruling and made this very clear.

"We know the rule very well,” Rick Spielman said. “We’ve talked to the Management Council. We understand everything that’s involved with it, but again, it’s something from a contractual standpoint that I’d rather not comment on. But, there are specific rules there and we’re quite aware of what the rules are.”

CLICK HERE to watch the full PFT Live interview with Rick Spielman from May 2017...

At the time of the PFT interview, there was a lot that was still unknown surrounding the timetable for Teddy's return to the field. Now that the speculation is in fact a confirmed activation has the tone changed?

Spielman echoed his disinterest in discussing the specifics of the tolling rule last week when he met the media for his annual bye week roundtable discussion leaning on the private nature of any and all contract discussions or decisions until made public.

It's dangerous to read between the lines here, but the lack of clarification both in the written CBA and from Mr. Spielman on two occasions leads me to believe this might be a card that the Vikings are holding in their pocket.

As mentioned above, if allowed, tolling the contract to 2018 would be EXTREMELY favorable for the Minnesota Vikings and lesser so for Teddy Bridgewater. No matter what, 2018 will bring a short "prove-it" contract for Bridgewater as teams will be hesitant to make a big commitment until they know exactly how his injured knee will react to live, repeated action on the football field. Still, in a league starved for good quarterbacks, that one year prove it deal for a guy like Teddy would still bring in MUCH more than $1.345 million.

Another note I was reminded of, thanks to Twitter follower @MitchBunker, if Teddy's final contract year is tolled to 2018, the fifth year option on his rookie deal is back on the table. That fifth year option is likely in the $10-$12 million range which seems like a lot compared to the $1.345 we've been tossing out, but comparably speaking it's still a bargain for a starting QB. A salary in that ballpark would pin him as the 20th or 21st highest paid quarterback in a league where Matthew Stafford is getting $27 million a year!

Unfortunately this article is going to leave us without resolution. I'm sorry that is the case but we'll likely stay in the dark on this issue until the team officially acts one way or the other or until someone with more information, the kind that is not available to the public, chooses to spill the beans. That right there leaves a chance that depending how the rest of the season goes and in an attempt for some sort of leverage in filing a grievance with the NFLPA, this information could come from Teddy's agent. But again, we won't know until something happens.

Teddy Bridgewater and the Minnesota Vikings seem to have a great relationship, there's no reason to think that this has changed. There is also no part of me that believes either side will act maliciously in this situation, that being said both sides will in fact act to protect the best interests of their parties. What kind of message does that send to Teddy? To his teammates in the Vikings locker room? That's where this thing could get hairy and very interesting.