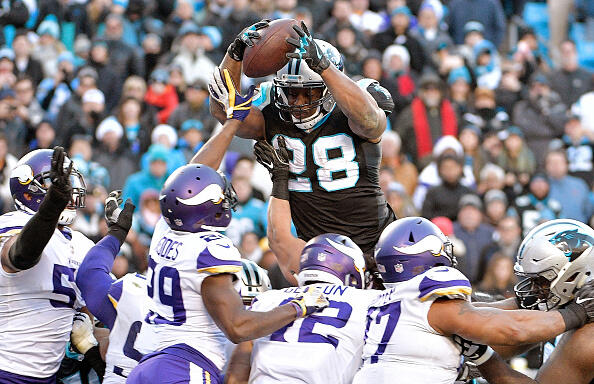 CHARLOTTE, N.C. -- The Carolina Panthers' goal-line defense rose to the occasion twice to prevent the Minnesota Vikings from taking the lead.

Those turned out to be crucial sequences in the Panthers' 31-24 victory Sunday afternoon at Bank of America Stadium.

"The red zone is 1-on-1," Panthers defensive tackle Kawann Short said. "We took advantage of that."

Twice the Vikings settled for field goals after having chances to grab leads near the ends of both halves, so Minnesota never led in the game.

"You have to score a touchdown there," Minnesota quarterback Case Keenum said of their late-game opportunity. "I think it just comes down to making the right plays at the right time."

The Vikings had first-and-goal at the Carolina 4 in the second quarter, and at the 6-yard line late in the game. Each time, they managed only field goals.

"We've had success," Minnesota receiver Stefon Diggs said of the red zone in the past. "The success we've had, we won those games."

The Vikings appeared to have a go-ahead touchdown in the waning seconds of the first half, but receiver Adam Thielen was ruled to have lost control of the ball while landing out of bounds. That 4-yard pass play from Keenum was wiped out on video review.

"I felt confident I had caught it, but that is the NFL," Thielen said. "You have to possess it and the ball can't move. The ball moved a little bit. That's just how it is."

--HE KNOWS THEM: Cornerback Captain Munnerlyn rejoined the Panthers during the offseason after playing for the Vikings. So he admitted to coveting the result.

"It's special, it's definitely special," Munnerlyn said. "When I first signed back here and I saw we were playing them on December 10 -- it's my wife's birthday, by the way -- I circled the game and I tried to just get through the season and wait on this game."

Munnerlyn was credited with three tackles and one pass defense.

"I had to get this win and now I have bragging rights," he said.

--SHALL WE MEET AGAIN? The Vikings (10-3) remain in line to win the NFC North, while the Panthers (9-4) bolstered their playoff credentials.

Carolina still has work to do to capture the NFC South. The Panthers are tied for first place with the New Orleans Saints, who have a season sweep and would win a tiebreaker.

"I wouldn't be surprised if we see those guys again," Carolina quarterback Cam Newton said of Minnesota.

The Vikings don't want to be overly consumed with the playoff race, though they know they're contending for home-field advantage throughout the postseason.

"It's December and we are playing against a really good team," Minnesota running back Latavius Murray said. "We had a chance to solidify ourselves. We did not do it. We have to figure out how to make plays and win the game."