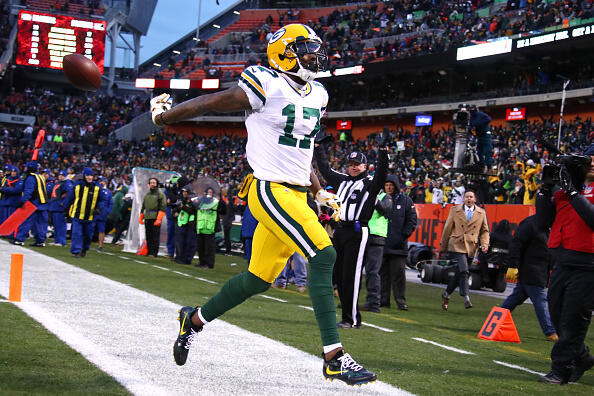 (Tampa, FL)  --  Matt Prater nailed a 46-yard field goal with 20-seconds left to lift the Lions past the Buccaneers 24-21 at Raymond James Stadium.  Matthew Stafford finished 36-of-44 for 381 yards, a touchdown and two interceptions for Detroit, which improved to 7-and-6 and now sits just one game behind Atlanta for the second wild card spot in the NFC.  Theo Riddick scored twice on the ground and Golden Tate had eight catches for 85 yards and a score in the victory.  Jameis Winston threw for 285 yards and a pair of fourth quarter touchdowns to tie the game for the Bucs, who fell to 4-and-9 with their third straight loss.  Winston also had two picks and one of three fumbles on the day for Tampa.

(Cleveland, OH)  --  Brett Hundley connected with Davante Adams for a 25-yard touchdown in overtime as the Packers beat the winless Browns 27-21 in Cleveland.  Hundley and Adams also hooked up for a one-yard TD with just 17-seconds left in regulation that tied the game.  Hundley finished 35-of-46 for 265 yards and three touchdowns for Green Bay, which improved to 7-and-6 and kept its playoff hopes alive.  The Packers are now just one game behind Atlanta for the second wild card spot in the NFC.  DeShone Kizer was 20-of-28 for 214 yards, three TD's and two interceptions for Cleveland, including one in OT that setup the winning touchdown.  Josh Gordon recorded his first touchdown catch since 2013 in defeat.  The Browns fell to 0-and-13 on the season and have now lost 31 of their last 32 games dating back to 2015.

(Cincinnati, OH)  --  Jordan Howard led a punishing Bears' run game as they barreled through the Bengals, 33-7, in Cincinnati.  Howard ran for 147 yards and two scores for Chicago.  Rookie Tarik Cohen ran for 80 yards and Mitchell Trubisky scored on the ground and through the air for the Bears.  They ended a five-game slide and improved to 4-and-9.  The banged-up Bengals' defense couldn't contain Chicago, giving up 482 total yards.  Andy Dalton threw for 141 yards with a touchdown and an interception as Cincy dipped to 5-and-8.

(Charlotte, NC)  --  Jonathan Stewart ran for 103 yards and three touchdowns as the Panthers held off the Vikings 31-24 at Bank of America Stadium.  Cam Newton was 13-of-25 for just 137 yards, a TD and an interception for the Panthers, who have won five of six to improve to 9-and-4 on the year.  Newton added 70 rushing yards on 11 carries.  Case Keenum was 27-of-44 for 280 yards, two touchdowns, two picks and a fumble for Minnesota, which saw its eight-game winning streak come to an end.  The 10-and-3 Vikings still hold a three game lead in the NFC North with three games to play.  Adam Thielen had six catches for 105 yards and a score in the setback.