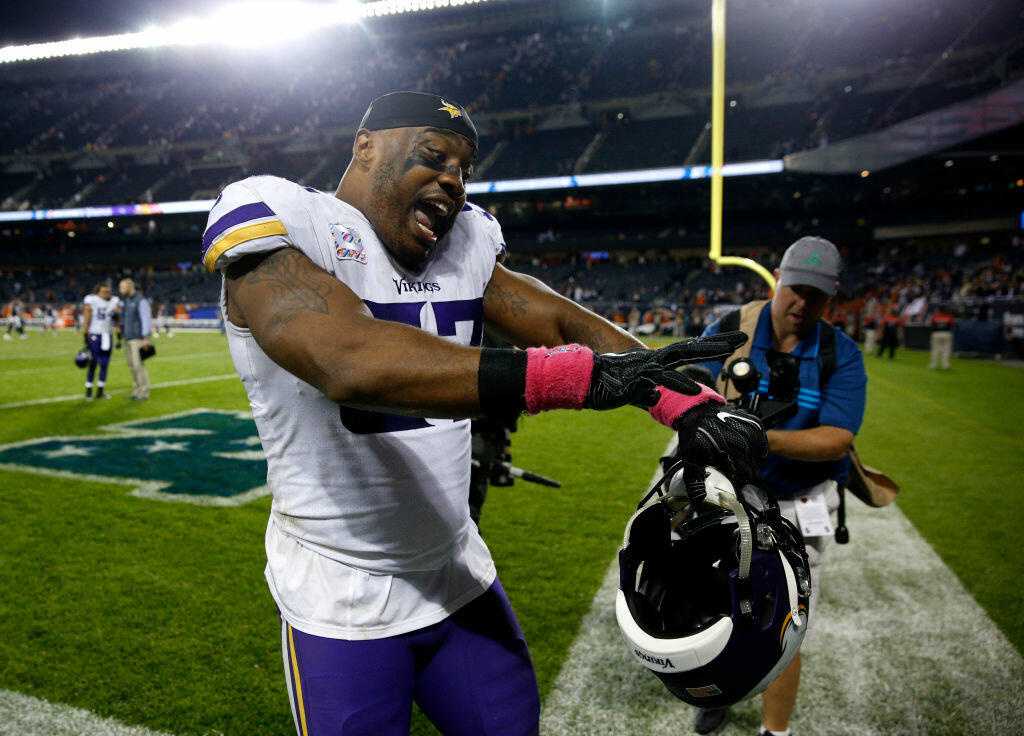 Eden Prairie, MN (December 19, 2017) – Vikings linebacker Anthony Barr, defensive end Everson Griffen, cornerback Xavier Rhodes and wide receiver Adam Thielen have been selected by players, fans and coaches to the 2018 NFL Pro Bowl. Barr and Griffen each earned their third trip to the Pro Bowl, while Rhodes received the recognition for the second time. It was the first time receiving the honor for Thielen.

Barr has started all 56 games he has played in as well as one playoff start. Barr has helped lead the Vikings defense to rank in the top two of the NFL in third-down conversions allowed (26.3%), offensive touchdowns allowed (23), passing touchdowns allowed (13), opponent 20-plus yard plays allowed (34) and rushing yards per game allowed (85.3). The 2014 first round draft pick has tallied 67 tackles (47 solo), 8 tackles for loss, 1.0 sack, 4 quarterback hits and 6 passes defensed on the year. His 47 solo tackles is tied for second-best on the Vikings defense.

The former UCLA Bruin becomes the first Viking linebacker to be selected to three consecutive Pro Bowls since Matt Blair (1977-1981).

Griffen currently ranks in the top five in the NFL in sacks and quarterback hurries and joined Dwight Freeney (2009) and Robert Mathis (2005) as the only players to record a sack in the first eight games of a season. Griffen’s 13.0 sacks on the year are a career-high and have helped the Vikings hold opponents to a 77.1 passer rating, fourth best in the NFL

The eighth-year veteran out of USC becomes the first Viking defensive end to be selected to three consecutive Pro Bowls since Chris Doleman in 1987-90.

Rhodes has been the shutdown corner on a defense that has allowed just 215.8 passing yards per game, third best in the NFL. He has now recorded multiple interceptions in back-to-back seasons for the first time in his career and his nine passes defensed are tied for the team lead. Pro Bowl wide receivers Antonio Brown and Julio Jones were held to seven combined receptions for 86 yards against Rhodes and the Vikings defense.

The Miami, Florida native becomes the first Vikings cornerback to be selected to back-to-back Pro Bowls since Antoine Winfield was named to three straight in 2008-10.

Thielen’s 1,191 receiving yards on 83 receptions rank second and third in the NFC, respectively. The Detroit Lakes, Minnesota native is 65 yards shy of recording a top-ten receiving season in Vikings history after entering the league as an undrafted free agent in 2013. His 32 receptions on third down is tied for the league lead, he has converted 24 of those into first downs, second best in the NFL.

The 2018 Pro Bowl will once again feature a battle between the AFC and NFC. The two conference teams will face off on Sunday, January 27, 2018 in Orlando, Florida at Camping World Stadium, one week before Super Bowl LII in Minneapolis, Minnesota.