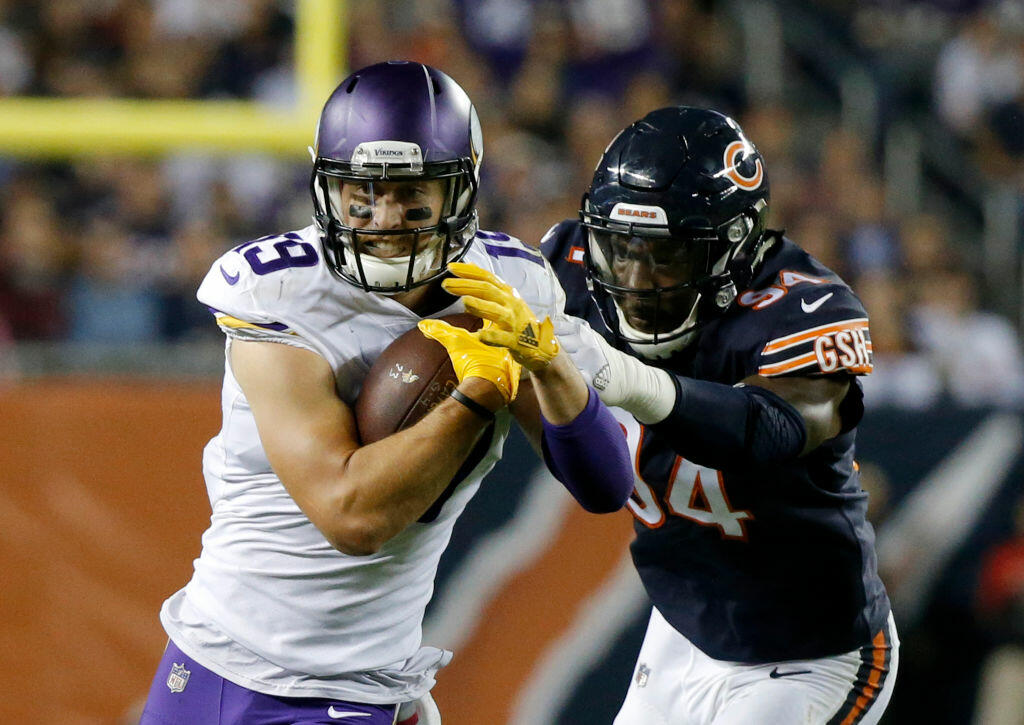 EDEN PRAIRIE, Minn. -- The Minnesota Vikings say they love it that Carolina is playing in Atlanta at the same time the Vikings are finishing the regular season against the Bears at home.

"We don't want any help from anybody," said tight end Kyle Rudolph, referring to the team's last-week battle with the Panthers for a first-round bye. "We want to win it ourselves."

If they lose and the Panthers (11-4) win, coupled with a New Orleans loss, Carolina gets the No. 2 seed by virtue of its victory over the Vikings on Dec. 10.

If the Vikings dispose of the Bears, they will need only two playoff wins to become the first team to play the Super Bowl in its home stadium.

The Philadelphia Eagles clinched home-field advantage, but remain somewhat of a mystery heading into the playoffs without franchise quarterback Carson Wentz.

"We just have to focus on the Bears right now," receiver Adam Thielen said.

If the Vikings stop the run and don't turn the ball over, this should be an easy victory. Much like the Bengals game (34-7) two weeks ago.

However, the Vikings also note that the Bears have had some feisty wins over Pittsburgh, Baltimore and Carolina.

"This isn't about momentum," head coach Mike Zimmer said Wednesday. "We need to win. It's important to get a home game, to get a bye I mean. If you can get a bye, it's like winning two games in one day. That's pretty huge, so we need to go out and win."

The key to victory for the Vikings is to contain Chicago's running game early and not allow Jordan Howard, the league's fifth-leading rusher with 1,113 yards, to breathe life into a team that could be firing head coach John Fox the day after the game.

SERIES HISTORY: 113th regular-season meeting. Vikings lead series, 59-51-2. Vikings are 35-21 at home against the Bears. They beat the Bears 20-17 at Soldier Field on Oct. 9. A victory Sunday at U.S. Bank Stadium would give the Vikings their fourth season series sweep of the Bears since 2000. It would be the second in head coach Mike Zimmer's four seasons. The teams met once in the playoffs. The Bears won 35-18 at Minnesota during the 1994 season.

--Sam Bradford hasn't been seen on the field since the first half of the Week 5 game at Chicago. When it became painfully obvious that his ailing left knee wouldn't allow him to protect himself on the field, he was pulled with the Vikings leading 3-2.

Case Keenum came on and has now played all but six quarters of a season that's seen the Vikings go 12-3.

But there's a chance that Bradford could return. In fact, he's expected to return to practice next week and could be activated from injured reserve during the playoffs. That would give the Vikings three healthy quarterbacks, including Teddy Bridgewater.

"He's been working out, doing things, getting on the field," head coach Mike Zimmer said Wednesday. "He's throwing the ball, doing workouts. I haven't seen him. I've seen him, but I haven't seen him work out."

Asked what he'll do once Bradford returns to practice, Zimmer said: "We'll see when he practices."

Bradford looked brilliant while winning the season opener against the Saints. But he wrenched his knee in the game, missed three games, tried to come back at Chicago and then went on injured reserve.

--As head coach Mike Zimmer's defensive coordinator, George Edwards is perhaps one of the most overshadowed coordinators in the NFL.

The Vikings' defensive turnaround the past four seasons continues as it enters the final week of the regular season ranked No. 1 in scoring defense. But no one credits anyone but Zimmer, the former longtime coordinator who finally got a crack at head coaching when he was 58 in 2014.

On Wednesday, Zimmer tried to throw Edwards a bone or two, going so far as to say he's considering turning over the play-calling duties to Edwards next season. That's something Zimmer has mentioned before, but hasn't actually done to this point.

"(Edwards) really does everything for me, other than I call the plays on Sunday," Zimmer said. "But I may change that next year."

Edwards and Vikings offensive coordinator Pat Shurmur were on the NFL's Career Development Advisory Panel's list of prospective head coaches for next season.

"George does everything," Zimmer said. "He helps with the game plan. He runs a lot of the meetings, the defensive meetings. Him and I really sit down and talk about all the different things that are going on. He studies the game just like he's calling the game.

"So he'll come in and talk to me about second down-and-whatever. 'They're doing this,' or, 'they're doing that.' Really, he does everything other than call the game on Sunday."

NOTES: FS Harrison Smith is the only player in the NFL with at least 70 tackles, one sack and five interceptions. He had two interceptions at Green Bay to tie his career high of five picks. ... NT Linval Joseph has been the cornerstone for a run defense that has allowed a league-low 19 runs of at least 10 yards. Denver ranks second with 27. If the Vikings don't allow a run of 10 or more yards on Sunday, they will have allowed the fewest such runs of any NFL team since 1991. The 1995 49ers allowed 20. ... RB Jerick McKinnon had the second-highest total yards from scrimmage in his career (146) in the Oct. 9 win over the Bears. He had 95 yards rushing, including a 55-yard touchdown, and 51 yards receiving. ... LS Kevin McDermott, who dislocated his shoulder in Saturday night's game, did not practice Wednesday and will not play on Sunday. The Vikings are hopeful that McDermott will be able to return for the first playoff game if the Vikings earn a bye. ... LS Jeff Overbaugh, an undrafted rookie in 2016, was signed to snap for at least Sunday's game. He spent training camp with the Rams in 2016, and brief stints with the Bears and Broncos early this season. The San Diego State product was named the top special teams player at the 2016 Senior Bowl. ... DT Shamar Stephen (ankle) did not participate in practice Wednesday. ... S Tramaine Brock Sr., who missed last week's game because of a foot injury, did not practice on Wednesday. ... C Pat Elflein, who has been battling a shoulder injury the past three weeks, missed Wednesday's practice. He missed the Bengals game two weeks ago, but returned to face the Packers. If he can't play, right guard Joe Berger probably would move to center. Jeremiah Sirles might then have to move to right guard and have rookie Danny Isadora step in at left guard. ... TE Kyle Rudolph, who was limited in last week's game because of an ankle injury, was limited in Wednesday's practice. He's expected to play.