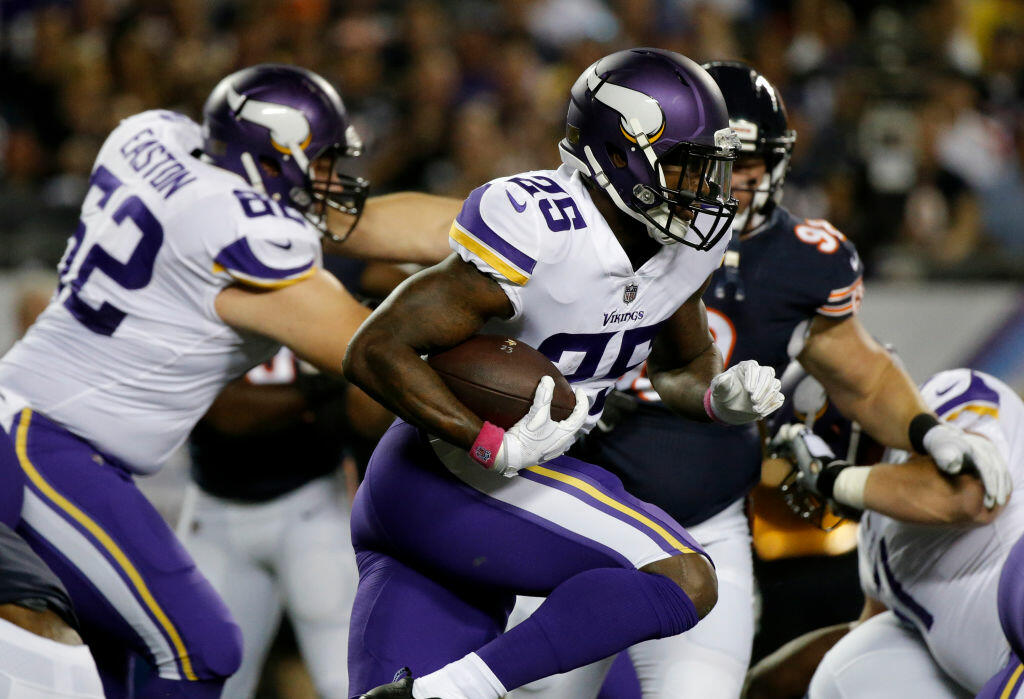 MINNEAPOLIS -- Much hung in the balance at halftime Oct. 9 in Chicago, with the Minnesota Vikings holding a tenuous 3-2 lead over the Bears and the road team's season seemingly at a crossroads.

The Vikings were 2-2, had lost emerging franchise running back Dalvin Cook to a season-ending knee injury a week earlier and had rushed presumptive starting quarterback Sam Bradford back onto the field after he'd missed the previous three games.

A loss in Chicago and they might have quickly fallen far back in the NFC North race.

With the Bears (5-10) coming to Minnesota (12-3) for the regular-season finale Sunday, it's amazing to fathom how much has changed since that halftime at Soldier Field.

Most notably, Case Keenum was reinserted into the starting quarterback role to replace an ineffective Bradford for the second half versus the Bears and proceeded to win 10 of the next 11 games, helping the Vikings grab their second division crown in Mike Zimmer's four seasons as their coach.

While Bradford spent much of his time under center last season running for his life behind a porous offensive line, the increased protection for Keenum has been one of Minnesota's great success stories in 2017. Although that feel-good story took a blow Saturday in the Vikings' 16-0 victory over the Green Bay Packers at Lambeau Field, when guard Nick Easton was lost for the season with a broken ankle.

Minnesota long snapper Kevin McDermott also suffered a shoulder injury and left the Packers game early. He is expected back for the playoffs, but the Vikings signed Jeff Overbaugh -- who spent short stints with the Bears and Denver Broncos previously -- as an insurance policy while they wait for McDermott to heal.

While Minnesota has clinched a playoff berth, it needs a win over Chicago or a Panthers loss in Carolina's game at Atlanta to clinch a first-round bye.

The Bears, meanwhile, have won two of their last three, but have fallen far below expectations and are widely expected to move on from coach John Fox after Sunday's game. Chicago is 14-33 with Fox running the show since he was hired three years ago.

Meeting with reporters this week, Fox sounded like he's fully prepared to move on to the next challenge if the Bears' brass decides he's not part of their future plans.

"I don't worry about it. I've never had trouble getting employment in this league and I'm not going to start worrying about it now," said Fox, who is 133-122 in the NFL, and took the Panthers and Broncos to the Super Bowl in his previous head coaching jobs. "It's not my first rodeo. I've been doing this for 28 years and 15 as a head coach. This is par for the course in this league. There's a lot of speculation every year and this year is no different."

Chicago got its fifth win of the season at home Christmas Eve, beating the Cleveland Browns 20-3, and saw another good -- not great -- game from rookie quarterback Mitchell Trubisky. Trubisky, the second overall pick in last spring's draft, was 14 of 23 for 193 yards in keeping the Browns winless and did not turn the ball over.

He also showed some mobility by rushing seven times for 44 yards and a touchdown. With 2,015 passing yards in 11 starts this season, Trubisky is now the top rookie passer in Bears' franchise history, surpassing the mark set by Kyle Orton in 2005. He downplayed the record, with an eye on the future.

"It's not really about individual stats to me. It's about growth and development, getting better each day, and I wouldn't have that without my teammates," Trubisky said. "I don't feel like I did anything special, just continue to get better each week and learn from my mistakes."

The Bears were 3-13 last season, and finished the campaign in Minnesota with a 38-10 loss. If Fox is dismissed after a loss in Minnesota, it will be the second time in four seasons that has happened to a Chicago coach. Marc Trestman was fired by the Bears after closing the 2014 season with a 13-9 road loss to the Vikings and finishing 5-11.

The Vikings have won the last two games in the rivalry, which dates to Minnesota's entry into the NFL as an expansion team in 1961, and the Vikings lead the all-time series, 59-52-2.