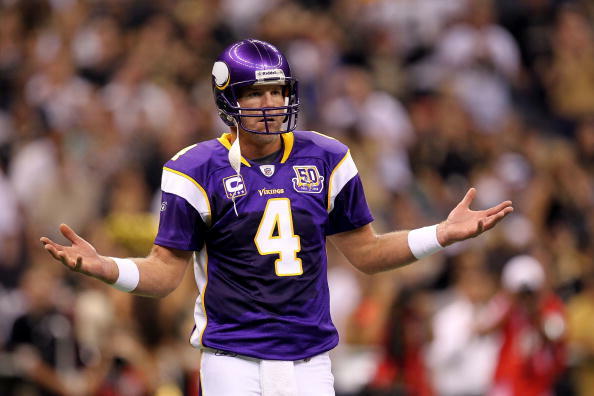 This weekend's game against the New Orleans Saints is drumming up all sorts of bad memories from the 2009 NFC Championship game that tragically ended the Vikings season. While that storyline is mainly coming from the fanbase and not the locker room with this year's squad, the feelings are unchanged.

In accordance with a set of interviews he is doing for a documentary series in which he is both the subject and producer for, Brett Favre chatted today and unveiled some interesting nuggets in regards to that game nine years ago.

Favre went on to say that the 2009 NFC Championship Game was probably "the most violent" game he had ever experienced in a notably violent sport. Remember, Favre's ankle was badly injured in that game and it was later revealed that the Saints had employed a "bounty" on knocking Favre out of the game.

That was the information that we knew, what we didn't know was this.

According to Favre himself, he was actually concussed during the Saints game after repeated late hits to the head and attempted to power through to finish the game.

KFAN's Ryan Donaldson was on the nationwide conference call and asked him specifics about that game and the potential for concussions and here's what Brett had to say...

"A concussion doesn’t necessarily have to be knocked out cold and removed from a game," Favre explained. "New protocol removes you from a game even if you’re not walking sideways. If you have head ringing or fireworks or any kind of fogginess, protocol says you should be removed from the game."

"In that game there was some head ringing, there was some fogginess. There were two times in which I was hit by Darren sharper late, he lunged at my head and both of them were pretty devastating hits, but I stayed in the game. On one they threw a flag on the other they didn’t. If head ringing or fireworks going off is a concussion, yeah I did have that."

An interesting revelation that showcases some of the differences between how both teams and players handled concussions only nine years ago compared to the seemingly inescapable emphasis that is placed on those scenarios today.

The isolated question from this interview can be heard in the player below...