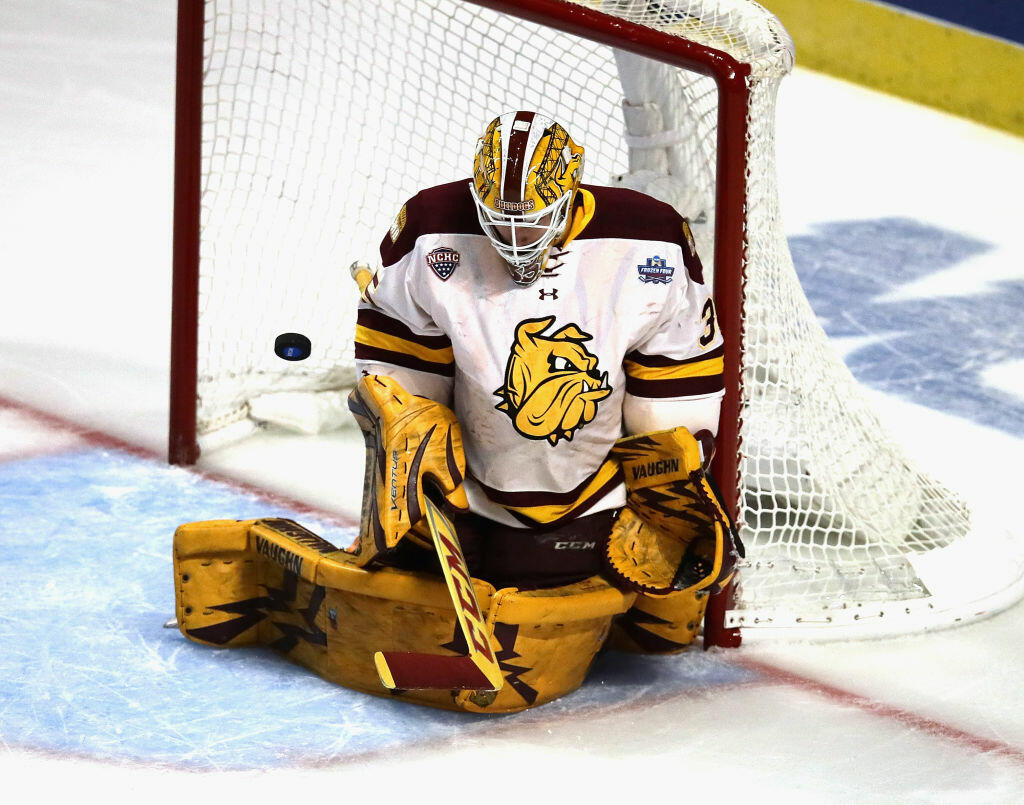 When Minnesota Duluth entered the Xcel Energy Center three weeks ago, they controlled their own destiny. All the Bulldogs needed was a win or a tie in one of the two NCHC Frozen Faceoff games to cement a spot in the NCAA Tournament.

Instead, they lost both games. The team’s hopes of extending their season rested on different scenarios in games across the country. The Bulldogs were battling mathematically with the Minnesota Golden Gophers for the final spot in the tournament.

After a nightmare day for the mathematically-favored Gophers, the final spot came down to the Big Ten Championship game between the Ohio State Buckeyes and the Notre Dame Fighting Irish. If Ohio State won, the Gophers would advance. If the Fighting Irish won, the Bulldogs would be the final team in the tournament by a margin of .0001.

Live streaming video and mobile internet have put an end to the traditional way of scoreboard watching. Bulldogs head coach Scott Sandelin said that his players were watching the action on the bus as they road back north on I-35.

“Guys are watching it on their computer,” said Sandelin. “I didn't look at the back of the bus. We got home. We got there just in time to see the end of the Ohio State and Notre Dame, and I watched it from my office.”

9:23 into overtime, Cam Morrison won the game for the Irish and helped send the Bulldogs into the tournament.

After winning the NCAA West Regional in Sioux Falls, the Bulldogs were back at the Xcel Energy Center for the NCAA Frozen Four to take on Ohio State, a team that could have ended their season just three weeks ago. Minnesota Duluth scored twice in the first 3:04 of the game and held the lead the rest of the way to beat Ohio State 2-1. The Bulldogs advance to their second straight National Championship game and their third in the last seven seasons.

The Bulldogs, who just barely made it into the tournament, are now headed to the National Championship game to take on the team that helped put them in the tournament—the Notre Dame Fighting Irish.

The Irish battled the Michigan Wolverines in their semifinal game. After the Wolverines went ahead 2-0, Notre Dame battled back to take a 3-2 lead. A Michael Pastujov goal with 5:22 left in the 3rd tied the game and overtime seemed inevitable. However with 5.2 seconds remaining in regulation, Jake Evans scored to send Notre Dame to the title game.

It was the fifth consecutive one-goal game win for the Fighting Irish. For Minnesota Duluth, their last three wins have been decided by a single goal.

The teams will meet at the Xcel Energy Center on Saturday night to decide the 2018 NCAA championship. It will be just the second meeting between the two teams in NCAA Tournament history, their first being a national semifinal game back in the 2011 Frozen Four which was also held at the Xcel Energy Center. The Bulldogs won that game 4-3 and went on to went on to win the program’s only title, beating Michigan 3-2 in overtime.

For Notre Dame, this will be their second appearance in the national championship game. The Irish lost to Boston College in the 2008 title game.

Minnesota-based teams in the Frozen Four are 2-0 at the Xcel Energy Center. The Gophers won it at the X back in 2002 and the Bulldogs used the home ice advantage nine years later. Scott Sandelin is hoping for a repeat of 2011 not only on the ice, but also in the crowd.

“I hope it gives us a big advantage,” said Sandelin “Because I remember in 2011 when we came out the building was electric….It’s great that we have a lot of our Bulldog fans here and maybe some people have jumped on board, but I want more and hopefully we can get this building really loud and pulling for us.”